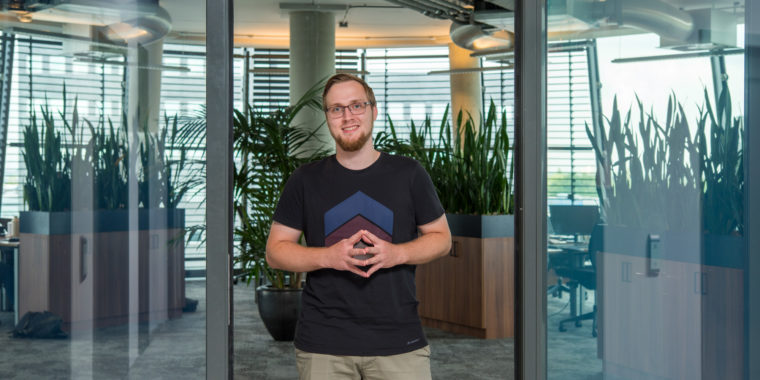 Our Ruby on Rails developer Vladimir knows how to rise to the top. Literally. “I love hiking in the mountains. Being on top of the world; it’s the best feeling there is!’ So it’s pretty surprising to hear that he moved to the flattest country in the world: Yes, I live in Haarlem now. It’s so different from where I’m from. Everything is cute and small, It’s very cozy, or as you guys say: gezellig!”

Vladimir is from Voronezh, Russia: “It’s not the biggest city in Russia, but it’s still three times bigger than Amsterdam!” In Voronezh, Vladimir worked as a remote developer for a company in Moscow: “It sounded great, working from home. But I didn’t like it. I felt like it was interfering with my work/life balance, plus, it’s pretty lonely. So I was ready for a change, I wanted to work abroad.”

“I saw on LinkedIn that BuyBay was looking for developers. The company immediately appealed to me”. Why? Vladimir takes some time to think and answers: “I think it’s because of my background. Being from Russia, you know. There is waste and junkyards everywhere. It’s a catastrophe and no one is doing anything about it. I was looking to make a change, to contribute to a better world, and that’s exactly what BuyBay is doing”.

“As a Ruby on Rails developer, I’m developing the software we use in our warehouse. We’re not just fixing issues, we’re constantly updating the software and developing new features. Every day starts with a morning stand-up. We discuss the current situation and what challenges we’re facing. I know this sounds like a cliché, but every day is different and that’s why working in this industry is so interesting. It’s constantly developing, it’s just impossible to know everything about what’s out there. New frameworks, new technologies. I’m always learning.”

Vladimir has been living and working in the Netherlands since January. Has he noticed any differences between the Netherlands and Russia yet? “Yes, there’s a big difference in the hierarchy. The Dutch way is very flat, and I’m not talking about the landscape! Obviously, there are managers but they’re very approachable. You don’t have a “Big Boss”. You see people, not titles.”

Vladimir points out that we’ve also got a lot in common: “People say the Dutch are very straightforward, or rude even. Russians are the same. They say it like it is. Russians might not look as friendly as the smiley Dutch, but once you get to know them, they’re very warm people too.”

Are you also ready to change the world? Check out our vacancies!